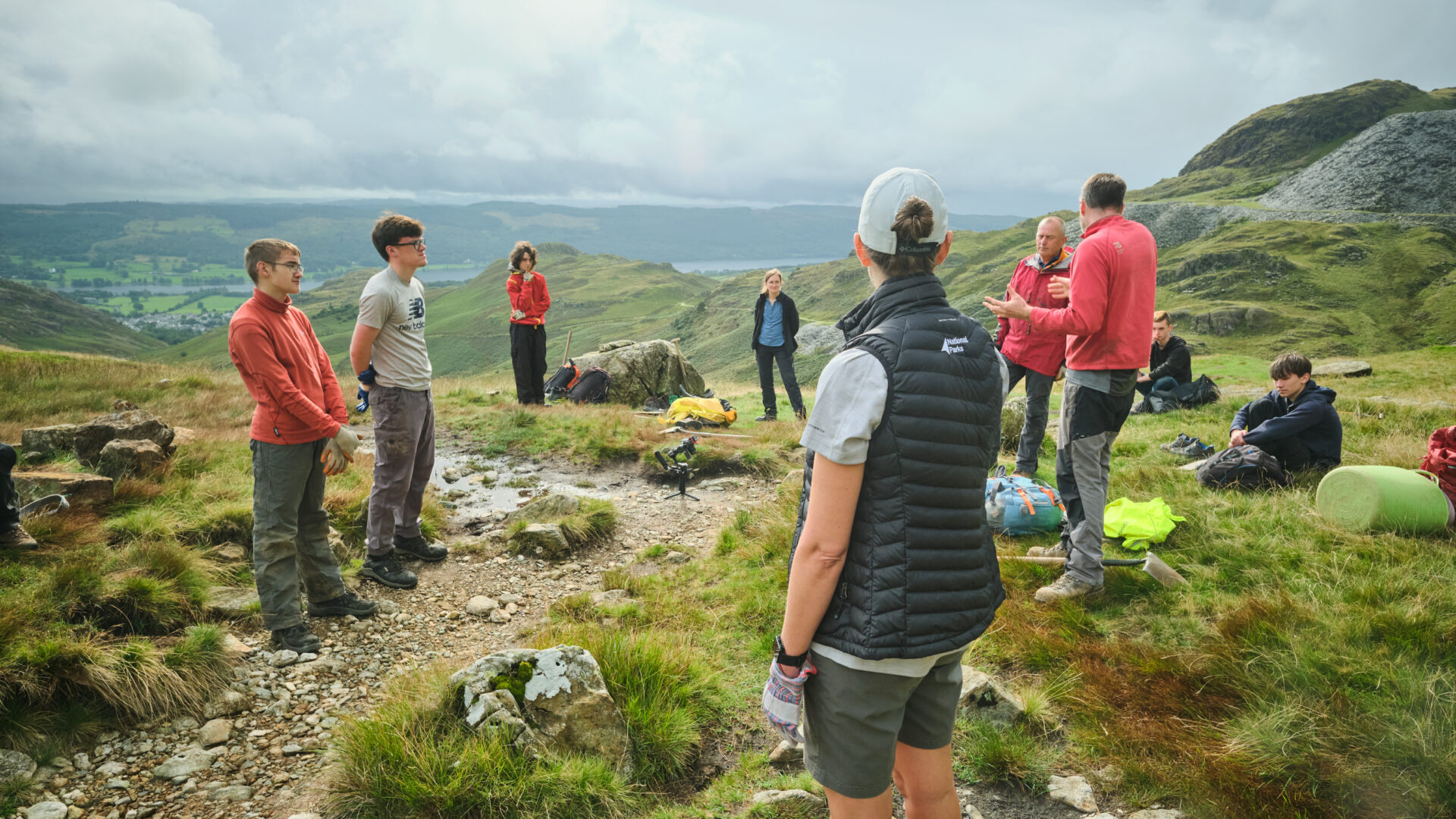 Find out more about Green Pathways
Scroll down

It’s no secret that some people find it far harder to access our National Parks than others. That’s why the National Parks Green Pathways programme is so important. It promotes nature connectedness for all young people, including those with Special Educational Needs, or who are marginalised or at risk of exclusion.

Here, three teachers explain how the young people they work with have benefitted. 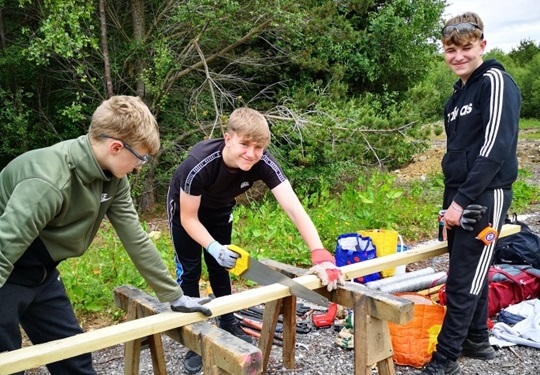 Erica Evans is head of Ventus House at York High School in York. Her school takes Year 3 students on a recurring six-week Young Rangers programme in the North York Moors National Park, following a successful trial project with a group of Year 10s.

“The Young Rangers scheme was offered to the school as a fully-funded project to help build resilience in our young people, many of whom have SEN and issues such as anxiety and low self-esteem,’ says Erica. ‘The difference it has made to them has been massive.”

Starting last July, the Year 10 group would go up to the moors each week to take on low-challenge activities, specifically-designed to build self-confidence.

Erica saw immediate benefits in all those who took part but says one student’s story stood out as an example of what the North York Moors Young Rangers scheme could achieve.

‘Prior to going on this project, we had one student who wouldn’t engage positively with teachers or with their learning,’ she explains. ‘Months on they have aspirations to do their GCSE’s, a plan to go to college and be successful in their chosen career which may not have happened without this programme.’

The student’s progress has been so good that they now help the school take Year 3’s to the North York Moors, as part of the scheme which took over from the initial trial.

‘The young person is there, guiding younger students and is a positive role model both in the park and at school,’ she says.

‘It shows them how English, maths and geography are used practically,’ says Erica. ‘They don’t always realise what they are learning at the time, but in class, if they say they can’t do something, we may refer them back, saying: ‘Remember when you used maths to work out the angle of the bridge we built?’ Then it clicks that they can do maths and that builds confidence.’

She believes the scheme’s success is down to the way National Parks rangers, instructors and volunteers have engaged with York High’s young people, helping to draw out their interests and building on successes.

‘The National Parks staff and volunteers have been absolutely key,’ she says. ‘They are so enthusiastic and relentless in their drive to engage the young people with the outdoor environment and its benefits. They are always monitoring how things are; what’s working, what doesn’t, and adapting the programme to fit in with that group of students.’

Another reason why the project has been so successful is because it’s free for the school and, says Erica, the National Parks’ staff are: ‘Brilliant at removing barriers to taking part. They think about everything, anticipating what might get in the way, making sure the children have the right equipment, even down to the right boots and socks.’ She advises all schools, but especially those who look after SEN students, to get in touch with their local National Park and see what Generation Green can do for them. ‘If it’s anything like our school, what they get out of it will be incredible.’ 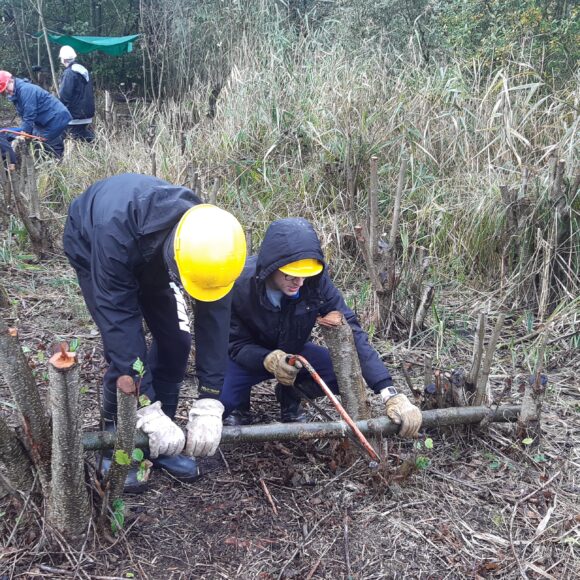 Emma Barlow is a teacher at Pathways College, which a Specialist Complex Needs College for students in Norwich, Norfolk. She takes Year 12 students who have challenges including ADHD, autism and visual impairment to work with rangers at the Norfolk Broads National Park

“We have a wide range of needs but the staff and volunteers at the Norfolk Broads are great, they really get to know the young people and adapt the activities to suit them.”

The college had been taking Year 12 students to work and help in the Norfolk Broads National Park for around three years before Emma took over in September 2021. This year’s cohort were given a new, exciting opportunity. ‘We were offered a residential as part of Generation Green in October 2021, which included activities organised by The Broads Authority,’ says Emma.

The Generation Green Project aims to connect young people to nature and get them involved with practical conservation work and its residential element was fully funded by the government’s Green Recovery Challenge Fund.

‘It was a success, so we decided to carry on with the work experience sessions every Friday at Barton Turf Adventure Centre,’ says Emma. ‘Students work with tools; sawing trees and using loppers on smaller branches. They learn how to carry and use the different tools safely and learn about how they are helping with the conservation of the Broads.’

Logs cut by the students are used for laying paths; the branches are used for hedging and dry twigs and sticks are collected for the fire.

‘Most of the young people haven’t done this kind of outdoor work before and learning and remembering what to do builds their confidence,’ says Emma. She has noticed their focus and perseverance improves over the weeks. ‘The rangers keep the instructions really clear so the students are able to pick up everything well, and they are very keen to show what they do.’

Sessions also go well, she says, because of the strong support provided by the National Park volunteers, who get to know students.

‘They are really encouraging and very good at knowing just the right level to work at, to help the young people,’ she says. ‘Some students have limited experience of the outside world and may not have the opportunity to experience the outdoors like this, so it helps with connecting them to nature. I love seeing them chat with the volunteers, many of whom are older than they are. They come out of their comfort zone and you can see them gaining knowledge and confidence.’

Sessions frequently end with sessions around a camp-fire, often with hot chocolate or marshmallow toasting. ‘It’s great to see the young people relaxed and happy with what they have achieved that session,’ says Emma. 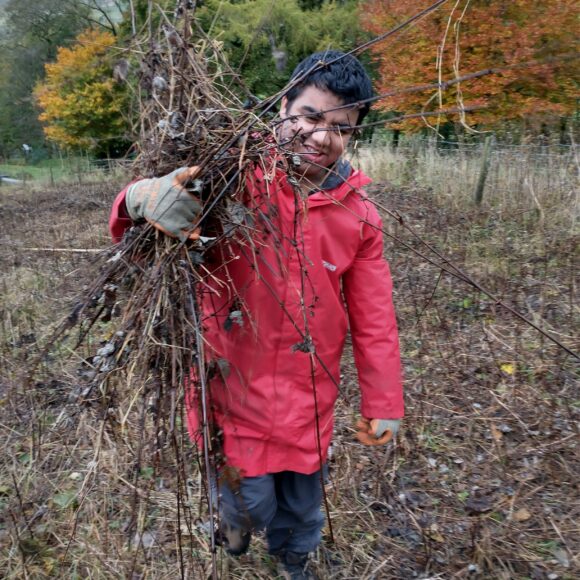 Steve Smyth is a Post 16 teacher at Green Meadows Academy in Leeds, a school for children with additional needs, including autism and ADHD. He says that volunteering in the Yorkshire Dales National Park as part of Generation Green produced immediate benefits for the young people he teaches.

“Green Meadows Academy had been developing a programme to get our Post 16 people out into the community, developing environmental awareness and some work skills, too.”

Up to nine young people aged 17-19 took part in a number of sessions in the Dales every few weeks, during the autumn term of 2021 and early spring term of 2022. They worked on a variety of projects, on land owned by different authorities.

‘We did some woodland management on Yorkshire Water land at Embsay Reservoir, removing old tree guards and helping tidy up a woodland they had planted,’ says Steve.

Other sessions included helping rangers clear and cut back vegetation on a permissive pathway which had become overgrown at Bolton Abbey, and using specialist rakes to prepare a wildflower meadow at Kilnsley Park.

One of the best parts, he says, was seeing the students working with older National Park volunteers. ‘It’s great for them to work with other adults and meet people who volunteer regularly. It also gave them a good insight into what a day’s work can actually feel like.’

He says the majority of the Generation Green students decided to stay on in school and work towards attending college, although one who leaves this year has been offered an environmentally-based outdoor job. ‘I think that attending this project helped them to make that decision,’ he says.

Along with confidence-building, he believes the benefits of Generation Green included the opportunity it gave students to interact with people they may not normally have met, and to enjoy a ‘try-out’ in a workplace.

It’s also given Green Meadows Academy the chance to make links with other organisations for future volunteering and they are now working with a local nature reserve and also with the Canal and River Trust.

‘One of the best things was the opportunity it gave them to do work that mattered,’ he says. ‘Over two of the sessions we completed the laying of about 200 metres of shale footpath, working with some of the regular adult volunteers. And the end it was something they could look at and see exactly what they had achieved.’