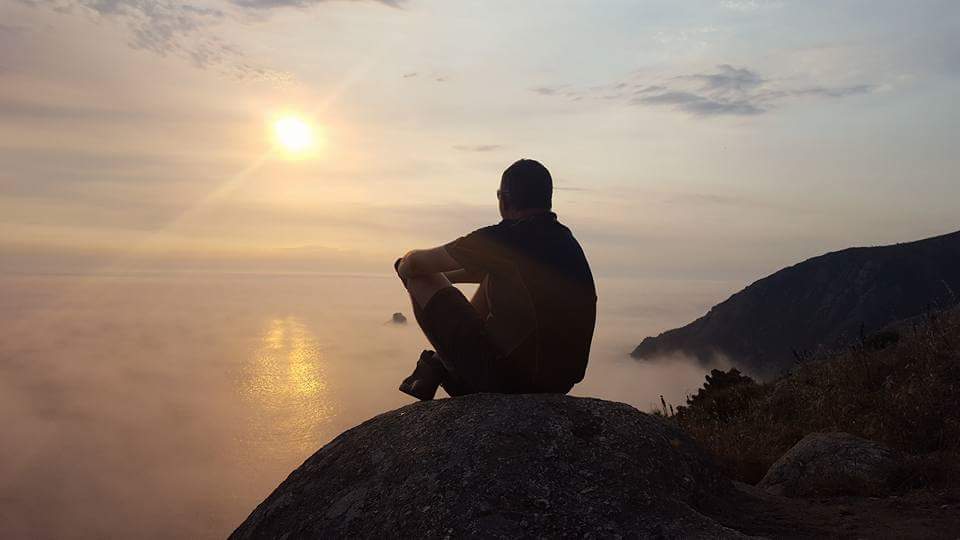 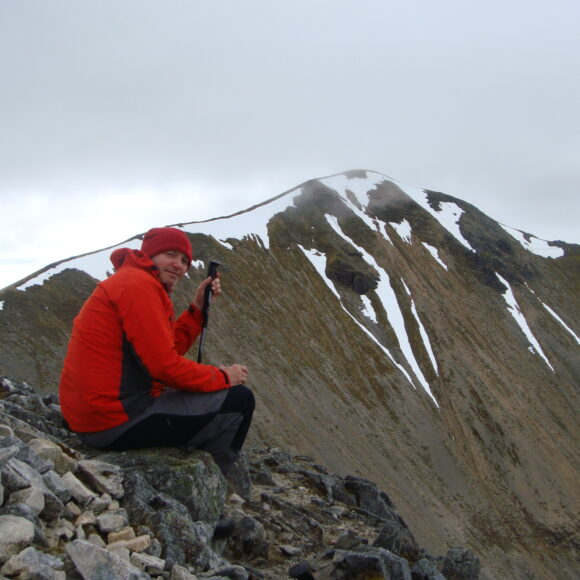 Mental health practitioner and outdoor leader Ian Whiteside describes himself as an “outdoor enthusiast and nature nerd”. He helps people to access the benefits of nature and find purpose in feeling part of something that is bigger than themselves through his non-profit Trek Therapy.

“There’s a concept called Nature Deficit Disorder. It explains that we need a connection to nature and, if we don’t get it, then we’re not fulfilled and not a whole person. We can’t reach our full potential without opportunities to access nature. That’s why I love what I do and why I do it as often as I can,” says Ian.

Liverpool-based Ian had his first introduction to the outdoors through a familiar route to many. “I did the Duke of Edinburgh award as a young person,” explains Ian. “I really enjoyed it, and then I went and joined the Army cadets and did some outdoor adventures. I had some family difficulties as a young person and when I was outside, I was doing what I see as fun and exciting stuff – it was my escape.”

His love of the outdoors developed alongside Ian’s career. “Then I joined the Parachute regiment when I was 17, which really catapulted me into adventure. I spent some years doing that and getting the army out of my system before leaving to work in construction. I ended up travelling all over the place and getting into these wonderful, amazing outdoor experiences. Travel broadens the mind, and I enjoyed meeting new people from different places.”

After seeing so much of the outdoors around the world, Ian started exploring the UK. “I have a daughter and I can’t really go off backpacking around the world anymore. So, what did I do? I thought, ‘Let’s do it here!’ It was the next best thing, but actually I’d say that the UK has got an abundance of excellent places to visit that we take for granted.”

“Scotland is amazing, but it’s an undertaking to make your way up there from Liverpool,” he says. “Truth be told, the Lake District is my favourite National Park. When you think about the Wainwrights and how many options you have for a walk – whether that’s a low-level visit to villages or going up into the hills, there’s so much there!”

For Ian, experiencing the outdoors with others is key. “I don’t think I have a favourite mountain, but Snowdon creeps in because of taking my daughter there when she was younger. I have vivid memories of it being one of the best days I’ve ever had, just because of the people I was with. Even if you go to the same place, it’s never quite the same. You always get a different day.”

When he was around 30, Ian’s work changed. “I became a youth worker. I recalled how much I’d enjoyed doing the Duke of Edinburgh award and what it had meant to me as a young person. I know how soothing the outdoors is for me. I switch off from negative thoughts. If it worked for me, it could work for everybody. I wondered, ‘Could I be that person to bring that to the young people I work with?’. Young people need some risk – that’s evidence based – and we can provide managed, morally acceptable and positive outdoor experiences that they can carry forward in life.”

“I set up a project that was for young people who were impacted by drug misuse in their families. I knew what that was like and that sometimes you need an adult to give you those experiences that you don’t always get taken on,” Ian says. “One of the most profound things I’ve ever seen was this young person, he was 11. We took him to North Wales, and he’d never seen sheep before. Introducing those sessions, that was the start of me using the outdoors to help people and was the beginning of the development of what Trek Therapy has become.”

Over time, Ian grew his interest and experience in using the outdoors to create a positive impact, but it was COVID that was the catalyst for the formation of his Community Interest Company (CIC), Trek Therapy. “I work for Beacon Counselling Trust – that’s my bread and butter, day-to-day work. When COVID happened, people weren’t comfortable coming into the building, even though we had an exemption as we were a mental health support service,” Ian explains. “For our suicide bereavement group, we said, ‘Well let’s just get them outside’ and we started off with that. I did all this in my spare time, just because I wanted to play and enjoy myself. It’s like getting paid to have fun and I’ll do that all day.”

Trek Therapy then evolved to be set up as an independent CIC, which has meant it can work with a broader range of users. It still supports Beacon Counselling Trust service users, but also now works with other local organisations, including Merseyside Police, to access the outdoors and experience the health and wellbeing benefits. “We have a range of people from those accessing bereavement support, to those impacted by addictions, to general wellbeing. Every group is different, and the type of work we do is different to other groups that are focused on getting people outside. Everyone has to find their place and space at the right time. We are a trauma informed practice. There is a movement now, but for me I’ve got a particular passion and care for the suicide support that we do.”

Ian is a mental health practitioner and a qualified outdoor instructor, which is a combination that he explains is important to the success of the project. “I’ve got a master’s degree in drug use and addiction. I’m a youth worker. I’m trained in counselling skills. I’m taking what’s called an Integrated Outdoor Therapy approach. I’m just fortunate that both of my experiences, outdoors and supporting groups, fitted together. It’s always been important for us to be able to say we are outdoor qualified professionals and we’re also mental health practitioners in our own right.”

Ian believes it’s also important to make sure the benefits continue after the sessions by providing information and skills. “It’s about the sustainability of the outdoor experience. We show them how to use a map and compass. We explain about what skills you need or who the other groups are that you can get in touch with. People have said to me, ‘I’d love to go and do what you did, but I wouldn’t even know where to park’ – let us help you figure that out. We all have to start somewhere.”

In our conversation, we talk at length about the importance of connection. Connection to yourself, to nature, to others and to something that is bigger than yourself. Ian talks about how this has motivated him to do things differently. “I have walked the Camino de Santiago twice now. People ask me, ‘Why?’ and it was because I wanted to be more than just ‘the dad’. I wanted my daughter to know I was a person, an individual that could go and do things they were passionate about. I knew that the Camino was bigger than me. I didn’t know whether I would complete the journey – I’d been doing lots of hillwalking, but I’d never walked that far before.”

“I saw it first on Simon Reeve’s programme Pilgrimage. My daughter was only nine years old, and I’d never not seen her for more than two days at a time before. I spoke to her mother and told her what I was thinking of doing, and she said ‘I think that’s incredible. I think you should do it and if you do, I’ll bring Gabby to see you halfway through’. That gave me the green light and having my daughter come and join me was really special. She walked some of the Camino with me and could talk to her teacher in school about it afterwards.”

People and community are an important part of the bigger story for Ian. “The Camino doesn’t finish – it started before I arrived, and it continues after I’ve left Spain. This summer I was with two friends from Germany who I walked with. I’ve stayed with them at their house, and I’ve had people from all over the world come to my house. One guy from Slovenia even let me fly his plane over the Julian Alps. And that’s just from meeting him on this walk.”

This drive to be part of something bigger is also what got Ian interested in Green Space Dark Skies. Led by Walk the Plank and commissioned as part of UNBOXED: Creativity in the UK, the project was a series of 20 gatherings in beautiful landscapes across the UK, finishing in September. Individuals and groups were invited to participate in the events as ‘lumenators’ and become part of creating a new art experience in our natural landscapes.

“I heard about the project on Countryfile and then looked it up online,” explains Ian. “The nearest event to me was Parys Mountain, Anglesey. It was running around the summer holiday period, so I booked it for me, my daughter, her friend and her friend’s mum. I love getting my daughter out into nature – if I can put nature and my daughter together then I’m in my element! I also signed up a Trek Therapy group for the event on Scafell Pike.”

“One thing that struck me throughout both experiences were the atmosphere. Positivity really oozed out everywhere,” Ian enthuses. “I wouldn’t normally go in massive groups into the outdoors – I like to have the place to myself – but as a unique experience it really made my heart lift. Smiles, everyone was happy. It was energising. This was something quite different.”

“With the Trek Therapy group, there was another different aspect of it because we could use the experience to help them with their resilience and to help them have a growing experience. It was a chance to do something that we hadn’t done before and be part of something much bigger than us. I’ve kept up with the other Green Space Dark Skies events since and after seeing the event in Ireland, we now want to do a group trip to visit.”

Find out more about Beacon Counselling Trust and Trek Therapy.