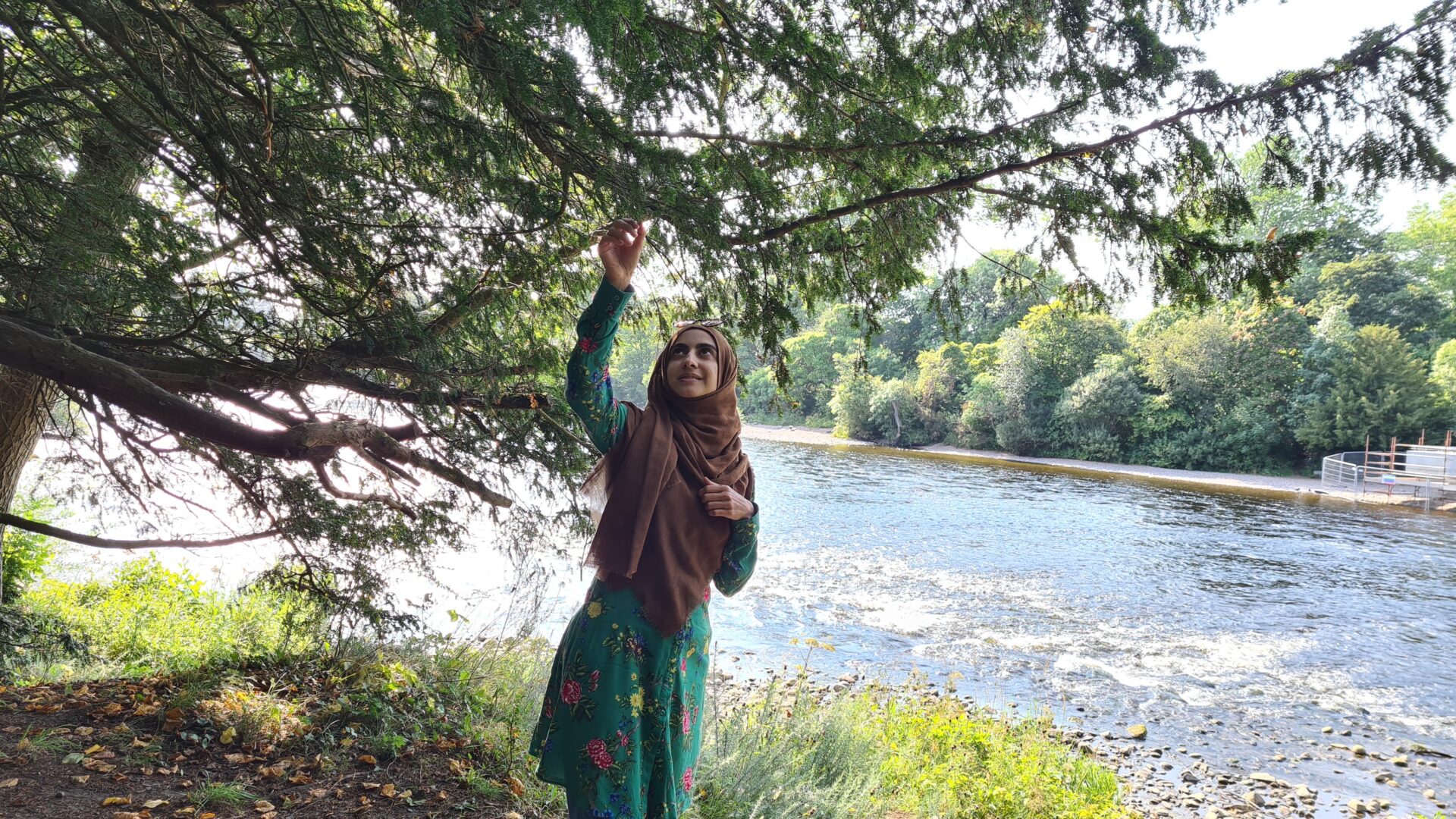 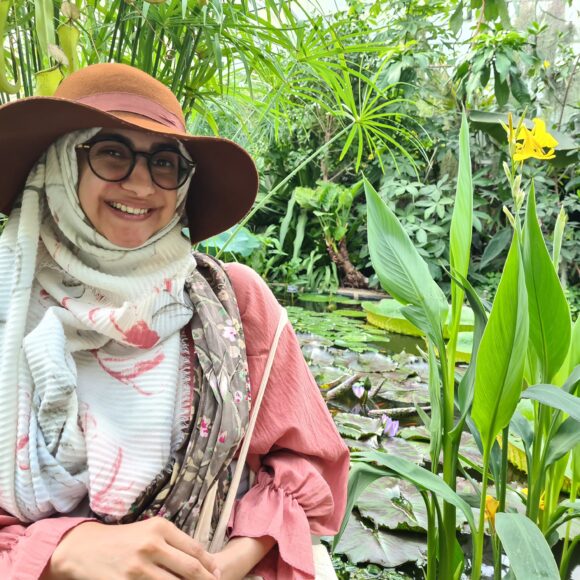 Haleema Ali is an artist, activist and educator, who uses creativity to inspire social change. After connecting with nature in a deeper way during the UK lockdown, she is finding creative ways to share her experiences of nature and spirituality with new audiences.

Luton-based Haleema grew up taking trips to the city in her childhood holidays. “I’m from a working-class background,” she explains. “I was born here but my family is Kashmiri Pakistani. When it comes to immigrant families, you are often here in the UK to get a good education. Even though back home, they lived in a village with all the animals, here it was so different. Work, and build the best life for the future. We didn’t explore many nature spaces growing up. Instead, our days out would be to London to visit the Natural History Museum and the Science Museum – and I love museums, so that was our thing.”

After being forced to quit her chemistry degree due to illness, Haleema had a winding career that led to passion for activism and social justice. “I became a teaching assistant, working in a Pupil Referral Unit with vulnerable kids. It was really rewarding,” she says. “At the same time, I began to get more politically active. I went to 10 Downing Street in 2016 to meet the men and women who worked with Nelson Mandela. It was so surreal being able to interview them – hearing them talk about the fight against apartheid was a life-changing moment. I was also working with the Labour Party. Then I went from teaching to mentoring young people and working with youth charities. I also did an internship with an MP.”

As her career was developing, Haleema noticed that she was missing something. “I have always been creative. In the back of my mind, I was always thinking, ‘Should I do something creative? Or should I go down the scientific route?’ I did the test that shows whether you are more left brain (analytical) or right brain (creative) and it turned out I was 50:50. I thought why should I be closing off one side of myself, when I have talents to do both? One day, I realised that the things I wanted to do, I couldn’t see them anywhere. That’s when I became a freelance artist.”

Since her realisation, Haleema has run an exhibition called ‘Life in Chains’ focused on human rights, injustice and oppression, which received coverage on BBC news, and ’22 Seconds to Murder’ highlighting the reality of knife crime in collaboration with victims’ families and the local community. “I think the artistic side of me has always been there and I use it as a form of activism. I want to create a change in the world. I don’t go to protests because I wear the hijab and it’s quite unsafe, so I was thinking outside the box for other things I could do.”

When the COVID lockdown came into force, Haleema found a way to reconnect with nature through her creativity. “My 10-year-old brother has a rare medical condition. When the pandemic hit, the doctors weren’t sure who would be particularly vulnerable to it so, as a family, we had to shield,” she explains. “We weren’t allowed out at all. We were lucky that we had a garden. I’d never wanted to sit in it before but that was the only access we had to the outdoors. I bought a cheap sun lounger and put on a floppy hat and pretended that I was abroad.” She laughs at the memory.

“I started using my phone to do some photography and then some oil painting. Eventually I got furloughed as well, so I thought let me try and explore that creative side of myself, and I realised how much I missed nature. When it was taken away, that’s when I realised how much I really needed it.”

This exploration gave Haleema a new lens to view the world when she could finally leave her home. “I went on socially distanced walks with my siblings. And because I don’t drive, we were forced to look at what was directly around us,” she smiles. “I started taking lots of photos and doing artwork from them. Nature really inspired me. We started discovering loads of places in Luton. One day I discovered this really cool path to the river. Local people had created a ‘Bridge of Hope’ dedicated to the NHS and it was covered in artwork. It was such a nice thing to stumble across.”

This wasn’t the only way that Haleema’s community used art as a form of connection during the pandemic. “Another local lady started a project based on a South Asian style of collective quilting. Normally women would gather together and embroider patches into one big sheet, but because of the lockdown she wanted that sense of togetherness, although people couldn’t be together. She had packs made and posted to us, and she set up a What’s App group. We’d embroider and share. Then it was made into this collective piece. I thought it was an amazing representation of what you could do with creativity to bring people together.”

“For my patch, I made an artistic lung, and out of the lungs flowers grew. I wrote breathe underneath it. It’s in memory of those who were lost in the pandemic, but also the idea that it’s a blessing for those of us who can carry on being able to breathe. It’s pretty but also it has meaning behind it.”

Haleema has continued to see connections between her artwork and nature. “I feel like nature is a universal language, but the way that you experience nature is individualistic. Some people want to immerse themselves – listening to the sound of rustling leaves or hearing the birds sing. Whereas someone else might really admire the beauty. I feel like it’s the same with art – everyone experiences it in such a unique way. I’m a very visual person, so that draws me in first. But if I go deeper into the woods, I love the sound of rustling leaves and I really like the smell of lavender. Using all your senses is such a nice way to experience nature.”

As she explored her local area, Haleema found that there was far more on her doorstep than she expected. “We found out that Luton actually has quite a few Bluebell woods. I was so annoyed that I didn’t know that until the pandemic hit. There is this also walk in the Chiltern’s called ‘Blow’s Downs’ and we saw cows. I never thought I’d see that from Luton! And we discovered another place that had sheep.”

Having these new experiences so close to home led to deeper discoveries for Haleema through her Muslim faith too. “I read somewhere that most of the prophets were brought up as shepherds, and the idea was that if they are going to lead a nation, they start off smaller, leading a flock of sheep for example. And when you look at any kind of revelation, like when the Quran was revealed, there are always lots of ties to nature. There is a story about Prophet Muhammed going to a cave in a mountain to meditate and to see God. I thought it was quite profound that you see these kinds of spiritual connections to nature in history, and the links to people’s wellbeing and spirituality. It was an eye-opener to reflect on that and to imagine how many people might have walked the same path. You’re treading in the same footsteps as your forefathers.”

When it comes to visiting National Parks, Haleema has big plans but there are a few barriers in the way. “It’s on my wish list to visit them all,” she says. “And not just visit, but fully experience them. I’ve been to the Lake District and the Peak District. This summer was the first time I’d been to the Lake District, and I couldn’t believe that something so beautiful existed here in the UK. I went to a Friends of the Earth camp when my sister used to work with them. We stayed in an Airbnb and there were sheep in the field in front. I remember thinking that it was so lovely.”

“One of the reasons I haven’t been to as many as I’d like is because I don’t drive and public transport outside of cities is awful. In Luton, you are lucky to find a bus within 40 minutes, and journeys that take 10 minutes by car can take up to two hours using two buses and cost the same as a taxi. What’s crazy is that it is easier and cheaper for me to fly out of Luton airport to somewhere in Europe, than it is for me to get a train to the North to somewhere like the Lake District. This barrier hits working class communities the most and it applies in a lot of places, especially rural communities. I wish that there were more ‘tour’ type day trips from places like Luton. It would make things so much easier.”

“Also, for people of colour, and especially with me wearing a hijab, there are certain spaces which I would feel unsafe to go by myself – I’m forced to go as part of a group. Other people want that sense of community as well and if they aren’t experienced in the outdoors then hikes can seem quite daunting. How do you know what the right equipment is? And then, again, cost is a factor. It all plays a part in accessibility and diversity in the outdoors, and it needs to be addressed.”

This is why Haleema is keen to emphasise the benefits of projects like Green Space Dark Skies, which provide support to accessing outdoor spaces in new ways. Led by Walk the Plank and commissioned as part of UNBOXED: Creativity in the UK, the project was a series of 20 gatherings in beautiful landscapes across the UK, finishing in September. Individuals and groups were invited to participate in the events as ‘lumenators’ and become part of creating a new art experience in our natural landscapes.

“With Green Space Dark Skies, they arranged transport to the event and doing something as simple as that can literally open doors for people,” Haleema enthuses. “I had just recovered from long COVID and it was really nice to get involved with an event again. I was going to attend anyway, but then I was asked if I’d like to be more involved as an advocate for the project. The key thing for me was that it was a great way to promote that there is all this green space around us in a place like Luton. I was able to share my own experiences of why I wanted to get involved. I did that through poetry and posted about my experiences exploring as a Muslim in green spaces.

“One of the nicest things was being there with the community and seeing people from all different walks of life and attending for all different reasons. Some people wanted to explore green spaces and some were there for their health and wellbeing, while for others it was spiritual. Then the fact we could create that beautiful artwork with the lamps lighting up the night sky while experiencing this dark red sunset. It was such a beautiful moment.”

Have you got a favourite memory in Nature? We would love to hear from you, share your story here