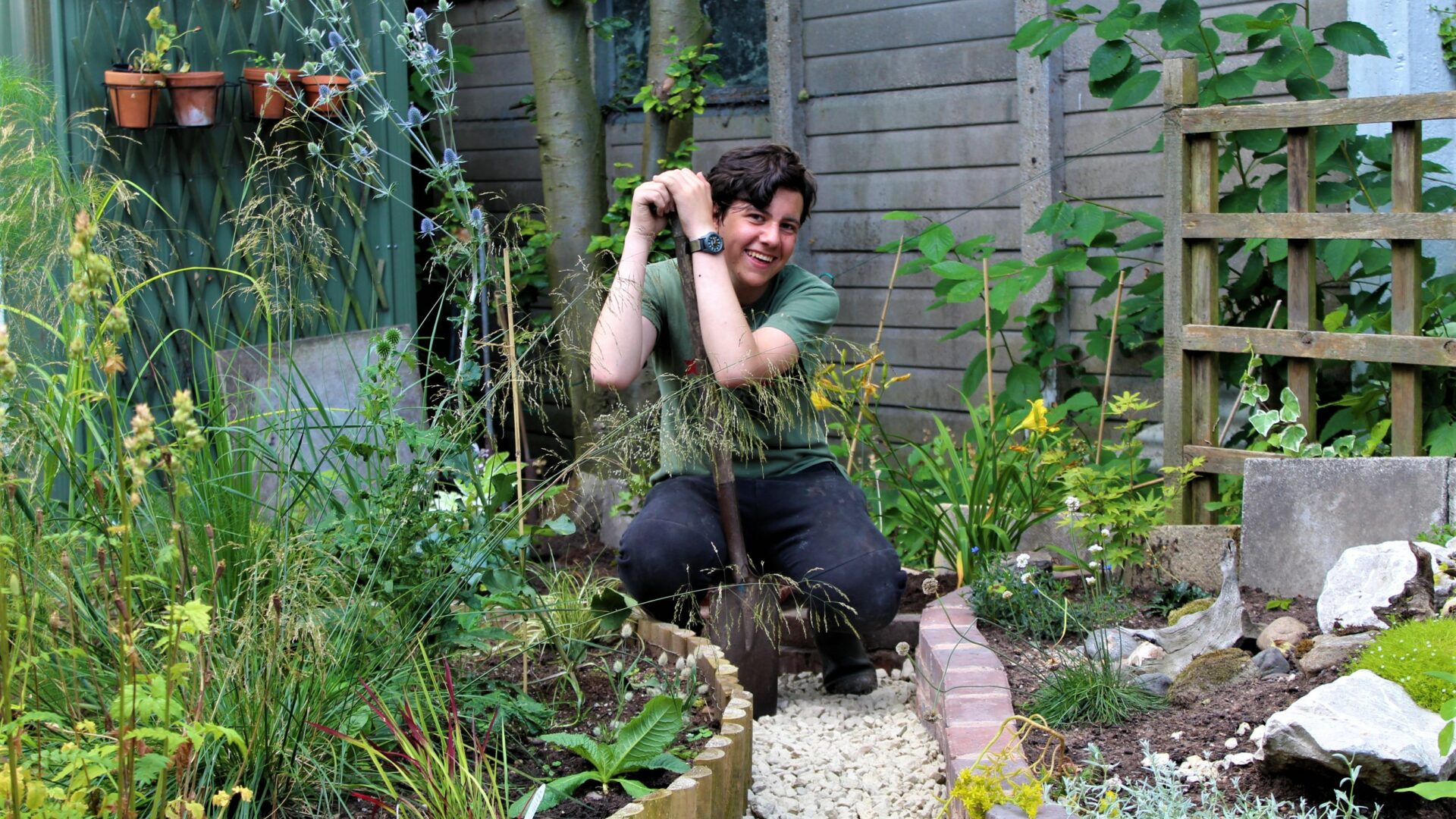 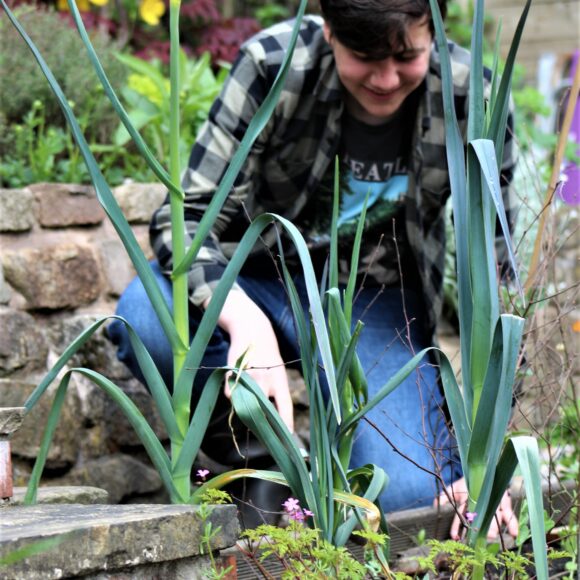 More commonly known as ‘Green-fingered George’, 17-year-old George Hassall wants to encourage everyone to make their green spaces more wildlife friendly – whether that’s a windowsill or a community garden. For his latest project, he is transforming his grandmother’s garden.

“You can’t say ‘Right, you are going to be interested in gardening because that is how we are going to save the world’. It doesn’t work like that. You have to bring out the energy and enthusiasm to get involved in lots of branches of nature – it’s not necessarily just gardening,” says George.

George has already achieved a lot of attention for his work in the nature space. He met naturalist and presenter Chris Packham on the One Show, helped in the garden on iconic children’s TV show Blue Peter and now is building an audience for his work transforming his grandmother’s garden. But where did his deep love of nature originate? “My dad has always been interested in gardening and I was pretty young when he started doing our garden. At the time it was all rubble and I was involved in planting seeds,” George explains. “My mum does a lot of community work. She’s got an allotment and works with people with learning disabilities to help them become involved in gardening and cooking. Also my gardening teacher at primary school was very influential in getting us outside. I think all of them together encouraged my interest in gardening, nature and wildlife.”

George is surprisingly casual when he mentions his TV work. “I was just very, very lucky that I got invited onto the One Show when I was in primary school, and afterwards Blue Peter got in touch,” he says. “I ended up helping with the garden for quite a while and did a few shows doing little bits and bobs. You meet the presenters, get mic’d up and have all these cameras pointed at you – and then you realise afterwards that you’ve worked six hours for six minutes of film. It was such an amazing experience, because it’s every kid’s dream to be on their favourite show.”

But out of the cameras’ gaze, some of George’s most memorable experiences in nature have been within National Parks. Living in East Manchester, on the outskirts of the city, he has been able to access the Peak District and South Pennine Moors. “During lockdown, we spent a lot of time exploring it because, trust me, you can social distance up there – it’s about a 20-mile social distance!” he says.

“Moorland is often described as a barren landscape but it’s a totally individual and unique habitat. In other places you get mountains or hills, but to have peat bog moors, it’s really special. For me, seeing the wildlife and getting to know the place, it’s almost like a person with a character and personality. You see the dark clouds and think, ‘he’s going to be angry soon’ and you get off before it rains. Other times you think, ‘he’s really happy’ and there’s a nice breeze and mountain hares, grouse, golden plovers and short-eared owls, and it’s a beautiful habitat.”

However, despite his obvious enthusiasm for his local outdoor spaces, George has a secret. “Even though I should be very loyal to the Peak District, I have to admit my favourite National Park is definitely the Cairngorms,” he smiles. “It’s just incredible. The mainstream Caledonian forests are just magical – flocks of crossbills, crested tits and red squirrels. Then me and my dad spent some time hiking up in the mountains, which was amazing. The wildlife on its own – ptarmigan, snow bunting, dotterel, eagles, black grouse – is proper flat salt wildlife that you’d be seeing in the mountains of America somewhere. And then the habitat – big boulder fields and massive snow fields. We were knee deep in snow in June!”

“You explore this vast habitat and you think you’re travelling miles and miles, and then you look at it on a map and you’ve covered this tiny part. You’ve got the forest, moorland and the absolutely epic mountains formed from glaciers, tectonics and granite. Geologically, the flora, the form, the history – there’s just so much to see and experience. When you get away from the popular hotspots, it’s just vast and quiet, and calm and beautiful. You feel like you’re the only person there. Of course you have to have your wits about you – you’ve got to know where to go and when you’ve got to check the weather. It shows the true dangerous haunting beauty of that sort of habit. You’ve got to respect it.”

Free access to beauty like this is something that George is obviously passionate about. “Right to Roam is a controversial issue and there are pros and cons, but for me the natural world shouldn’t be contained by people who just have money. It shouldn’t be something that is controlled by the economy – it should be free for everybody. It’s your right as a living thing on this earth to access the land that is around you. Nature is a community, an ecosystem. You should be able to play a part in your ecosystem.”

George’s current project is working in the much smaller patch of his grandmother’s garden, which he documents through his blog. The project started during the COVID-19 lockdown. “Once we were allowed, we went round and said ‘We are not just going to tickle it up and do a bit of weeding, we are going to completely redesign it’. My grandad used to do a lot of work on the garden, but after he passed away my grandma struggled to do it on her own. It got a bit overgrown. We hacked it all back, saved what we wanted and then really morphed it from there! I’m really proud of it. I go around and do the hard landscaping and the heavy jobs. Then when I’m not there my grandma will do the trimming back and keep on top of it, and it really works. We work hard to make sure it’s environmentally friendly – we don’t use pesticides, we think about the plants that we are putting in for pollinators and carefully choose the compost we use. It’s a really important thing that we’ve done together and it’s ongoing, we still have loads to do.”

George brings his growing knowledge of ecosystems and nature to his gardening. “Obviously you can’t recreate the Cairngorms in the back garden,” he laughs, “but thinking about incorporating your local habitat is quite easy to do. When I was in the Cairngorms when I looked in people’s gardens they had Scots pine and bilberry growing. For us, in the garden, we look to the moors for inspiration for what to include and what to leave out. For example, the easiest thing to bring in would be heather which gives a nice purply effect. But on the moors you also see peat, so you might choose peat-free compost because you want to make sure you don’t negatively impact the moors themselves. Think about what the native trees and native plants are around you, and also consider the wildlife. If there are particular birds you want to attract, think about the sorts of plants you want to include to do this.”

Of course, not everyone has their own outdoor space, and George wants to talk about shared spaces too. “If you have a community space, you need to think about how you can provide what everyone wants but also create a space that everyone can use. It needs to be accessible, so that a wide diversity of people can get involved – people who might be disabled for example – and to make sure everyone can come and use it whenever they want. They might not be coming to garden, but maybe just to sit and enjoy the peace and tranquillity of it all.”

George has had a clear route into his nature work but he advocates that everyone just gets stuck in. “I know a lot of people when they are starting something new immediately go to a book or watch a video on YouTube, but for me I learn from talking to people and communities,” he explains. “And I think the best technique is just to be a bit crazy and go for it. Make mistakes because you’re going to make them anyway. Don’t overthink it, just do and see what happens. I could bore you for an hour with the amount of mistakes we’ve made in our garden, grandma’s garden and the community garden, and it’s not necessarily things that you would pick up in a book.” 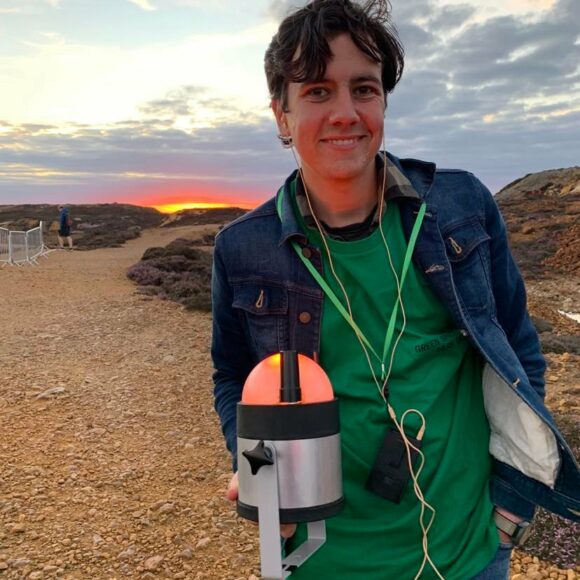 Recently George applied his own advice in a different way and leapt into an unusual outdoor experience at a Green Space Dark Skies event. “They invited me over to the copper mine at Anglesey and I had no idea what to expect. I met some of the team there – they were dead nice and friendly, and it was a really amazing set up. We were given geo lamps and put headphones in that gave us instructions, and then by moving around holding the lamps you created these amazing patterns and artwork.

“The mine itself was incredible – it was just like being on Mars. It was so interesting looking at the geology. There was a lot of iron in the rocks – they were orangey red. The Snowdonia mountains were a really good backdrop, and the sea too. And there was a rapper, rapping about copper! It was so surreal. I kept thinking, ‘I wonder if there is anyone walking the dog watching, thinking ‘what on earth is going on there?’’. I would do it again – it was cracking!”

So with so much varied experience under his belt, what’s the future for George? “I’d be really interested in presenting. I’ve always found it really fun and I think it’s a really good way to engage people.  I want to encourage young people to get a passion for nature. You can’t say ‘Right, you are going to be interested in gardening because that is how we are going to save the world’. It doesn’t work like that. You have to bring out the energy and enthusiasm to get involved in lots of branches of nature – it’s not necessarily just gardening. There’s bird watching, hiking, rock climbing, swimming, paddle boarding, painting… there’s loads! You don’t have to go and sit in a bramble bush for two hours and count how many caterpillars you see. It’s finding something of interest that can be grown into something bigger.”