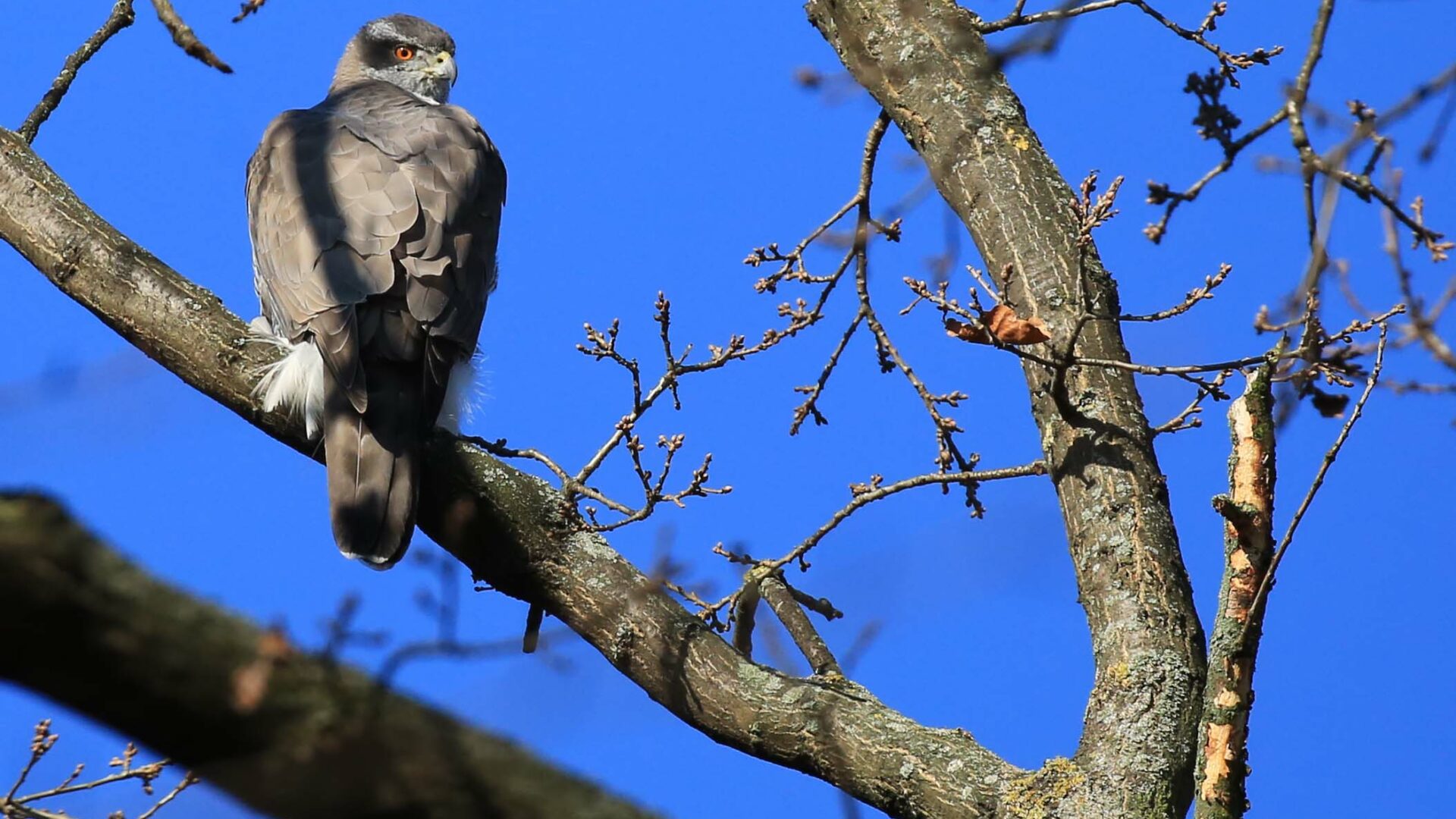 The magic and mystery of certain birds stays with you throughout life. Northern Goshawk and European Turtle Dove are two species which are close to my heart.

As a very keen teenage birder, I dreamt of seeing a Goshawk. With gripped attention I would devour stories describing their amazing power and pour over field guides showing their mean red-eyed stare, imagining the excitement of my first encounter.

They were a rare bird on the northern edge of the North York Moors National Park where I grew up in the 1980s. If I had claimed to have seen one, I would have never have been believed. But their rarity only increased my desire to see one. I learnt about their secretive nature and how they spend much of their lives hunting deep in the forest. Even if we had been lucky enough to have a breeding pair nearby, we may not have known they were there… I learnt about the ignorant persecution they suffered in the 19th century and then their recent rise again from the ashes of extinction. Their secretive behaviour nowadays is still a direct result of the same illegal persecution in the UK.

In 1991 I saw my first North Yorkshire Goshawk perched on a fence post on the edge of a forest in North Yorkshire. It quickly vanished but that memory has never left me. The size and bulk of that huge female made me immediately wonder how I could ever mistake one from a Sparrowhawk. The sharpness of eye and the speed at which it dropped from its perch and zig-zagged through the closely packed trees was exactly what I needed to see to keep that magic alive!

I have now been watching Goshawks in our beautiful North Yorkshire Forests for over 30 years. During this time, I have watched them displaying in spring and had fabulously prolonged views of recently fledged juveniles fighting above the forest. However, I have never seen one so close as that first encounter. I have since hankered for more close views but I was fearful this would take something away from my original memory of that secretive ghost of the forest.

In 2018 I travelled to Berlin to watch their famous city dwelling Goshawks. With no significant persecution in Germany, they are fearless. But maybe I would lose that magic…I need not have been so apprehensive. The amazing close views and insight into their life made me love these birds even more!

At the opposite end of the meanness scale are European Turtle Doves. They are gorgeously coloured gentle birds with the most soporific song and delightful display. What they lack in muscle power they make up for in migration stamina. A round trip of 11,000km completed every year to Africa and back!

They weren’t as rare as Goshawks in my youth but we were aware of their declining numbers, at that time I didn’t realise they had a stronghold in the North Yorkshire Forests. They started pushing north and nesting in North Yorkshire at the turn of the 20th century during a time of new forestry planting. Like many other so called ‘farmland’ birds they are essentially a forest species which has adapted to farmland.

As Volunteer Officer for the North Yorkshire Turtle Dove Project, I organise surveys every spring and I get very excited when I heard our first returning dove this year. Just after the sun rises the males sing from an exposed perch, their purr drifting across the forest. In 2020 I was even luckier when I heared a Turtle Dove singing at the same time as a European Nightjar, I was star struck!

Poets and authors such as Wordsworth and Shakespeare wrote so eloquently about the beauty and influence of birdsong. My personal favourite passage about turtle doves was written by Thomas Bewick in 1826 in his iconic book ‘A History of British Birds’

“Singularly tender and plaintive: in addressing his mate, the male makes use of a variety of winning attitudes, cooing at the same time in the most gentle and soothing accents; on which account this bird has been represented in all ages, as the most perfect emblem of connubial attachment and constancy”.

Our Goshawks and Turtle Doves share the same habitat, the beautiful North Yorkshire Forests. They belong here and occupy an important place in our natural heritage. We should be proud we still have an opportunity to enjoy their presence.

They do however share the same problem; illegal persecution which threatens their very existence. Turtle Doves are shot in their millions on their way to Yorkshire from Africa and Goshawks are persecuted in North Yorkshire. We pour hundreds of thousands of pounds into projects and protection for Turtle Doves but not so long ago a hunter could sign up for a European holiday shooting Turtle Doves for so called sport without any legal hurdle.

So why do we bother? Because these and many other birds are close to our hearts, because we really care, and because there are many generations of conservationists we must not let down.

If you are lucky enough to encounter a mysterious Goshawk or a beautiful Turtle Dove in the North York Moors National Park, bask in their glory, drink in the experience and make sure to contribute in some way to their survival.  Without your help we could easily lose part of our natural heritage forever. To help Turtle Doves visit the Operation Turtle Dove web page.

Find out more about the North Yorkshire Turtle Dove Project

This Blog was written by Richard Baines, Yorkshire Coast Nature