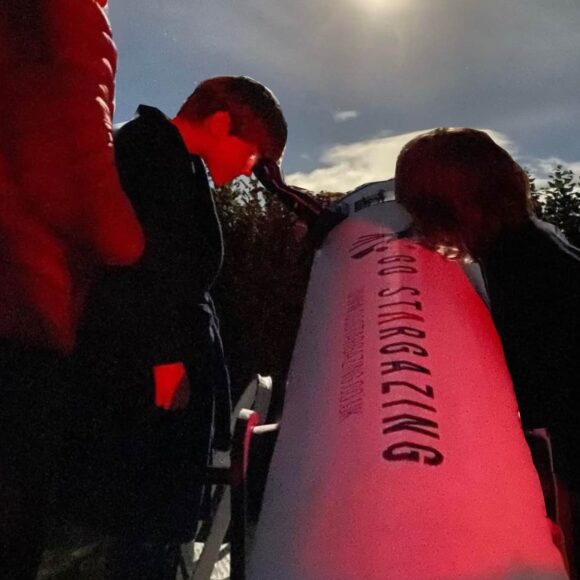 Keen outreach astronomer Neill Sanders wants to make stargazing as accessible as possible. He is the founder of not-for-profit project Go Stargazing, which helps you to get the best experience of the UK’s dark skies.

“Stargazing brings a lot of things together. Not just the enjoyment of the night sky, but also your wellbeing and impact on the environment – and there is a real community side of it as well.”

Neill found astronomy as an adult when taking time off from his high-pressure job. “I used to work as an IT director. I had no spare time and I found it very difficult to wind down,” he explains. “My phone was always ringing or I was looking out for emails. I was managing a team of around 30 people and it was all-consuming. One of my colleagues said ‘Just go for a break and get away from it’ and I thought ‘Where can I go where my phone will not ring?’. That’s how I ended up at Star Camp at Kielder.”

Star Camps are held at Kielder in Northumberland National Park, twice a year. “The weather isn’t always that great for the camps but the first time I can remember just having five nights of clear, starry skies without the humdrum of daily life going on,” Neill reflects. “The camps are always in October and March and can get quite cold.  My wife Karen was with me and it got down to minus 14 degrees – her toothpaste had frozen!”

“When I reflect on it, getting away from a computer screen was so important. When you’re looking at your screen, the fake photons of light are travelling about a foot. But when you look through a telescope at the Andromeda Galaxy, the light you see left that galaxy two and a half million years ago. It gives you a different perspective – that realisation that you are part of a far bigger universe than you can ever comprehend.”

But although this was Neill’s first experience of stargazing as an adult, it wasn’t something that was completely new to him. “I was always interested in astronomy. My first memory is of going on holiday to France with my parents, and my dad pointing out a couple of constellations. That was when I was in my early teens, but since then I’d never had time in life to get away from it and do that.”

After his experience as an adult at Star Camp, Neill was hooked. “I fell in love with it. I’m a bit of a townie so I really enjoy being able to get out in nature. I made some really good friends and I fell in love with Kielder. I was really enthusiastic and got invited to help out at the observatory there. I volunteered for Kielder Observatory for three years – and did the journey from my home in Darlington three or four times a week. When I left, I had a lot of spare time so I decided to set up Go Stargazing.”

Go Stargazing is an online hub designed to make astronomy accessible to a wide range of people. It helps you find nearby locations for stargazing, provides advice on when is best to go and shares upcoming events where you can join experienced astronomers in exploring the night sky. “It was set up originally just to raise awareness of some of the astronomy societies – initially in the North East – and it grew from there. It’s not for profit and it’s an extension of my hobby. It’s not my job although I probably put as much time into it!” Neill explains. “You’ll hear outreach astronomers talk about their contribution to the astronomy community, through being treasurer of a society or organising events. Go Stargazing is my contribution. The unique thing that I do is that I don’t only tell people where they can go where it’s dark, but I also tell them when astronomers are going to be there.”

As much as he can, around his job and running the website, Neill is out running events. “I love showing cool people cool things through telescopes,” he enthuses. “I’m very keen to get people out of the towns and cities, and looking up at our night skies and realising that they are always up there – we just don’t always get to see them.”

National Parks are ideal locations to run events because they have less light pollution and some even have received specific designations for the quality of the stargazing. “There are two types of location,” Neill explains. “First, there are ‘regions’ and then, secondly, there are specific locations within those regions. Some of the National Parks have been designated International Dark Sky Reserves or Dark Sky Parks. For example, Yorkshire Dales National Park, North York Moors, Northumberland and Exmoor, are all International Dark Sky Parks. These are regions within the park boundaries which are protected landscapes from light pollution and they have additional planning policies in place that govern this. To keep their status, they have to prove that their commitment to reducing light pollution is ongoing. I’ve been helping various National Parks to encourage ‘astro-tourism’, which typically happens outside the traditional holiday season. The end of season is the start of my season!”

National Parks often run events that incorporate astronomy, from Dark Skies Festivals in Autumn and Spring to ‘Star Parties’ where smaller groups are led by astronomers – and some of the events have their own unique twists. “One of my favourite places is in the Yorkshire Dales where I’ve done some stargazing events at Wensleydale Ice Cream. Just imagine looking through telescopes and then having some pistachio ice cream!” Neill smiles. “And these sorts of events attract families with kids who will be really enthusiastic. I find the smaller the person, the harder the questions because kids really do know lots about astronomy.”

Neill is always on the lookout for new, unique events to add to his website. This year this has led to a collaboration with Green Space Dark Skies. Led by Walk the Plank and commissioned as part of UNBOXED: Creativity in the UK, the project is a series of 20 gatherings in beautiful landscapes across the UK taking place until the end of September. Individuals and groups are invited to participate in the events as ‘lumenators’ and become part of creating a new art experience in our natural landscapes. “I saw what they were doing was very much what I like to do – to help people who don’t necessarily have the opportunity to get away from the towns to get out into the countryside and with the specific link of experiencing dark skies. It ticked quite a few boxes,” he says. “Initially I wasn’t sure because of the light aspect and we’re all about turning them off! But when I saw how they were doing it sensitively, with low impact lights, I reached out. It’s been an opportunity to meet and join a whole new network of people who also want to bring people into outdoor spaces.”

Events are a great way to get to know our skies and get support in exploring them, but the Go Stargazing site also gives you advice on finding locations near you and how to make the most of what you have around you. Neill wants to emphasise that you don’t always have to go far. “The best stargazing location that you can ever have is the one that’s easiest to get to – it could be your back garden or local park. Even if you are in a town with light-polluted skies, you can still see the 100 or so of the brightest stars, and planets like Saturn and Jupiter are very bright at the moment too. If you want to see all the stars and the Milky Way – a really bright region of stars arching across the skies – then you need to get away from light pollution. Even a couple of miles out of town can make a big difference. Just make sure that wherever you go, you pay attention to the phases of the moon. When there is a full moon, nowhere is dark. There is a calendar on the Go Stargazing website so you can check.”

Light pollution is a consistent theme in the conversation around viewing our local skies and Neill is seeing more interest in tackling this pervasive problem from within communities. “Light pollution is the fastest increasing form of pollution at the moment and yet it’s also the easiest to solve. I’m seeing more community organisations and groups coming together to do something about it – it could be a parish or a small town. People are becoming more aware of how much of an adverse effect it has on our wellbeing, health and sleep patterns, as well as nature and the natural environment. I am supporting some interesting projects, including one where they are campaigning to get all the lights turned off in Huddersfield for an hour one evening, and I’m going to go over with my telescopes and take some photographs to document it. Stargazing really does bring a lot of different aspects together, and it’s very linked to wellbeing and environment.”

To get stargazing advice, find the best locations near you or join an upcoming event, visit GoStargazing. You can even register to hear about events near you.

Find out more about Green Space Dark Skies and events