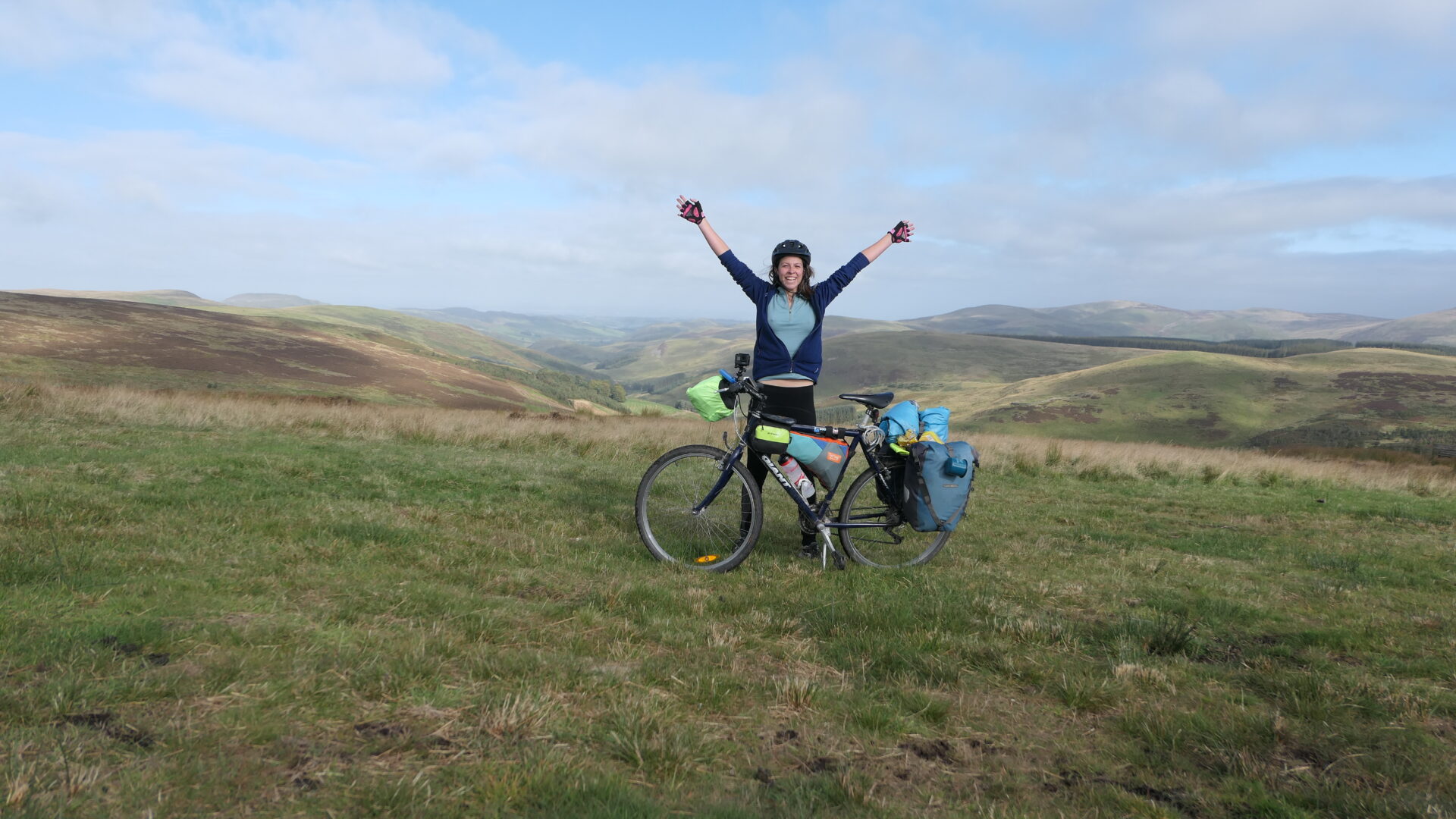 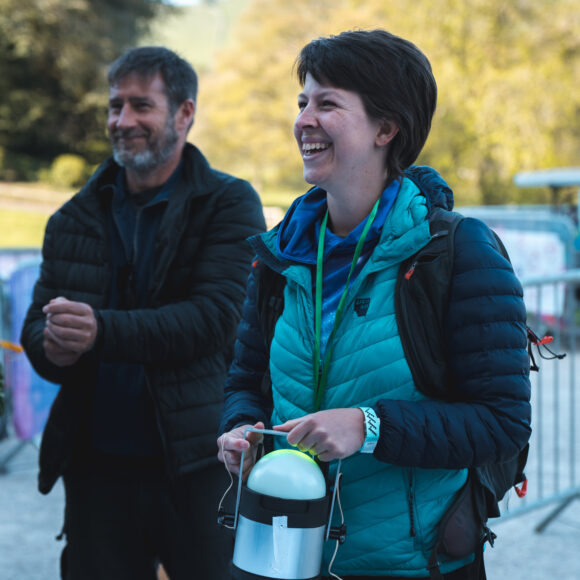 Sheffield-based Frankie Dewar is an adventurer, podcaster and joy seeker. After rejecting her outdoorsy upbringing, she has found her way back to natural spaces through adventure and community.

“There is a real link for me between the joy I feel in the outdoors, and that feeling of surprising myself with my own capability and resourcefulness,” says Frankie Dewar.

Immersed in an outdoor lifestyle from a young age, Frankie didn’t always find the joy in it. “I was quite outdoorsy, we lived in the countryside. Firstly in Devon, and then in the south of France. As a family, we had animals including horses, so I would be out all the time with them. But as I got older, I started to really resent having to be outside, looking after these animals, and not having the same freedom and flexibility that other people my age did. In my head I decided that I just hated being outdoors. I hated being in the countryside and all I wanted to do was be in a city surrounded by people. So when I left home, that’s what I did.”

Frankie moved to Brighton and left her outdoor roots behind her until about four or five years later when she went to university. “Initially I rediscovered it because I ran out of money. I’d bought a pair of hiking boots so the only thing I could afford to do was go hiking,” she laughs at the memory. “And it really wasn’t until I was 24 or 25 that I realised that there were National Parks. I got a job that meant I had to travel around the country and I’d never explored any of these home locations before, and I passed through the Lake District and the Peak District. I remember thinking ‘Oh wow, these places exist in the UK!’”

Since then Frankie has found both solace and challenge in the outdoors. Between lockdowns in 2020, she spent 71 days cycling a 1,972 loop through England Wales and Scotland interviewing women and non-binary people about how they continued to bring adventure into their lives. “I went to Northumberland National Park for the first time during my cycle trip, and it’s so old, remote and just beautiful,” she enthuses. “I did this huge stretch on my £80, really bad, fixed-frame bike and two panniers, while mountain bikes passed me with full suspension.”

The experience of riding across Northumberland was not just about being surrounded by the beauty of the natural environment. “I crossed over from Kirk Yetholm, all the way across Northumberland and almost down into County Durham. It was so beautiful and on that day I felt so capable. I knew that I’d done a huge thing because not only was the distance tough, but the route was tough. Afterwards I went to the pub for chips and there were loads of middle-aged male cyclists there, and every time I told them where I’d come from they’d say, ‘Oh wow’. That feeling of being a solo female traveller and receiving that respect was such a powerful feeling.”

Now an experienced outdoor enthusiast, Frankie reflects that the connection between challenging herself and joy has existed from her first adventures outside. “What’s cool doesn’t matter in the outdoors, all my favourite memories are times when I’ve thought ‘Wow I can’t believe I just did that’, ‘I can’t believe I just went for a hike’ or ‘Do you know the other day I slept in a tent?!’ And I get a lot of solace from these experiences too – I find that there is something reassuring in reminding yourself of how capable you are.”

With all these solo outdoor adventures under her belt, it would be easy to think that Frankie only enjoys the outdoors in isolation but actually it has also been a way for her to connect to a broader community. “When I first started getting into the outdoors, I was at university in Guildford in Surrey, which is not an obviously outdoorsy place. All I wanted to do was go climbing and hiking and do trips and adventures, but I found that I didn’t know anybody else who wanted that at all,” she explains. “Having explored the UK so much more, I now know that no matter where you go, you can find people in that local area who are doing cool things.”

So how did Frankie go from not having an outdoor community to finding people all over the country to connect with? It probably isn’t how you would expect. “I have found almost all the people that I know in the outdoors through Instagram. From my partner, to my best friend, to climbing partners, to community groups that I’m part of. I search for hashtags and then I find people!”

From long-distance cycling to climbing, hiking and camping, Frankie has explored the  UK outdoors in lots of different ways but there was one experience that she hadn’t checked off yet. “As a kid, I would watch all these community art projects on the telly and I’d want to know how you could get involved and be part of something that was so much bigger than just me. Then I came across the Green Space Dark Skies project and I knew I wanted to be involved.”

Green Space Dark Skies, led by Walk the Plank and commissioned as part of UNBOXED: Creativity in the UK, is a series of 20 gatherings in beautiful landscapes across the UK from now until September. Individuals and groups are invited to participate in the events as ‘lumenators’ and become part of creating a new art experience in our natural landscapes.

Frankie took part in the first event in the Peak District on her own, but still found that all-important human connection in an event that is showcasing technology in the outdoors. “I was a little bit nervous as I didn’t know what to expect, but it was really well thought through,” she explains. “Firstly, it’s great to be part of something. To know that you’re creating this artwork and that you are the medium to create it. Secondly, what I really enjoyed was meeting people from the community across the Peak District. As you moved with the lights you were positioned next to someone who then became your ‘buddy’ and you’d just end up chatting. I met three or four other people through doing the choreography – and it also meant that you had people as markers for if you were in the right place! It felt like a really clever way to make community through the artwork, even though it might have not been the aim.”

Community is important to Frankie, so it’s top on her list for her next outdoor adventures. “I’d like to get back into cycling, so I’m currently looking for Peak District cycling clubs.” She is also going to continue to explore the landscape on her doorstep. “We moved to Sheffield about a year ago and we visit a lot of the same places, but I went to a completely different part of the Peak District for the Green Space Dark Skies event. It’s great to have that reminder that there are so many other places out there locally and I’ve really just scratched the surface of what the National Parks have to offer.”

Frankie Dewar is an adventurer, podcaster and joy seeker based in Sheffield, England. A climber, hiker, skier and cyclist, she is the host of the Extraordinary Ordinary You podcast. The podcast interviews women and non-binary folk about how they continue to be adventurous throughout their lives. The best place to keep up with Frankie’s outdoor adventures is, of course, on Instagram.