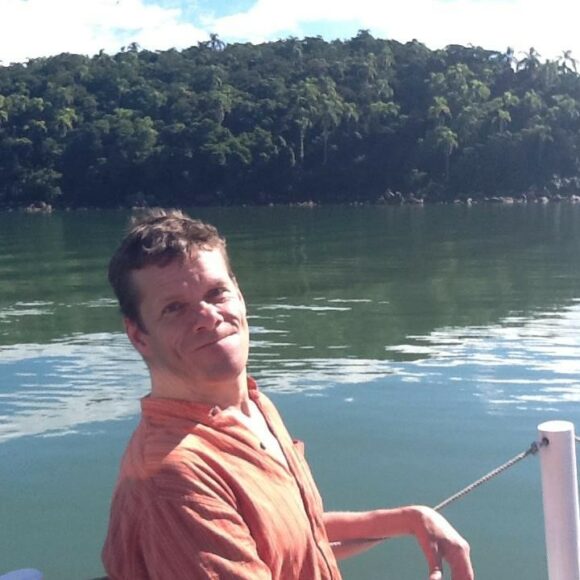 Playwright, director, actor and advocate, Jamie Beddard, is a man of many parts. His latest is as a Co-Director for Green Space, Dark Skies – part of the pan-UK Unboxed festival of creativity taking place in AONB and the National Parks. Here he explains the importance of being outdoors; for work and life.

He’s had ample opportunity to observe this difference, having seen audiences reacting to his work for some 25 years, since leaving the University of Kent with a Sociology Degree.  He was, he says, fortuitously thrust into the world of performance; on stage and behind the scenes.

Alongside appearances in the National Theatre’s production of The Threepenny Opera in 2016, Jamie’s credits include The Messiah at Bristol Old Vic, Estragon in Tottering Bipeds’ production of Waiting for Godot, Ubu for Graeae Theatre Company, the Dormouse in Alice in Wonderland at Nottingham Playhouse and Mr Jonny Gotobed, both on stage and on TV, for the BBC adaption of Carrie’s War.

He is currently Co-Artistic Director of Diverse City and Lead Artist for Extraordinary Bodies, and has been Associate Director of Graeae Theatre Company, co-editor of ‘Disability Arts in London’ magazine (DAIL) and facilitated in many higher education institutions, drama colleges and community settings.

His outdoor work includes directing ‘Breathe/Battle for the Winds’, the opening ceremony celebrating the Olympic and Paralympic Sailing events in 2012 in Weymouth, bringing together companies and 80 performers, from the UK and Brazil.

Even when access is difficult – Jamie is a wheelchair-user – and the weather is against him: ‘It can be hard when the weather is inclement’, he is always up for the challenge of working outside.  ‘I like working with dramatic and amazing backdrops,’ he says.

Although brought up in London, he has always had family roots ‘in the middle of nowhere’ in Orford, Suffolk, and his love of the outdoors is rooted in the big skies, forestry and spectacular scenery there; ‘I used to have a tricycle and loved tearing through the woods, many great childhood memories’ he says.

Being outdoors and away from normal surroundings undoubtedly helps his creativity.

‘I go away a lot, especially pre-pandemic, and travel up and down the country with work and following football – I’m on my own, away from my desk and able to think and dream’ he says.

He lives in Stoke Newington in London with his partner and two children and gets out every day, a pandemic ritual when everything suddenly became much more local. ‘I really enjoy a circuit of the park, the fresh air, the trees, the wildlife, the fellow walkers,’ he explains. ‘I get ideas when I’m out.’

Needless to say, the outdoors can be really challenging from an access point of view, and he is passionate about ‘opening up the outdoors’. ‘We must find ways to ensure the countryside is not the preserve of the few, but open and inclusive to all,’ he says.

He believes the countryside just isn’t accessible to many people; ‘Many different people find the countryside difficult to get to for a variety of reasons.’ Another issue he’s noticed is that: ‘Common land is diminishing, so there’s less space for people to use.’

Environmental issues and the climate crisis provide the backdrop of another show he is currently working on; ‘Delicate’; ‘We are exploring delicate and fragile bodies in a world that is changing, unruly and precarious,’ he says.  Opening in Norway in July, before touring the UK in the autumn, this is the latest show staged by Extraordinary Bodies.  A professional circus company, Extraordinary Bodies demonstrates how disabled and non-disabled people can work together under the guiding principle of showing how the world could be, if everyone was equally valued.

And then there is Green Space Dark Skies. The event will see 20,000 volunteer ‘Lumenators’ carry low-level, environmentally friendly light globes to create giant patterns and images for people to see in the dusk in wild places. The locations will be kept secret until nearer the time, to add to the element of drama and theatricality.

The artistic idea is that these lights, when illuminated in patterns, will help nature connectedness through personifying the landscape. Jamie will be Co-Directing, alongside Billy Alwen, one of the sites in the South-West. Of the project he has written: ‘Opening up and animating these beautiful landscapes is an artistic dream, and working in places and with communities that are new to us is incredibly exciting.’

Directing such an operation will be another challenge, especially, he says, having the narrow time of dusk to stage the event, but he’s confident that it will be a success and that the events will attract people who have never been to anything similar. He can’t wait to witness their reactions: ‘It’s going to be unlike anything I’ve done previously, a spectacle of lights, landscape and community’ he says.

Join in with Green Space Darks Skies and become a Lumenator