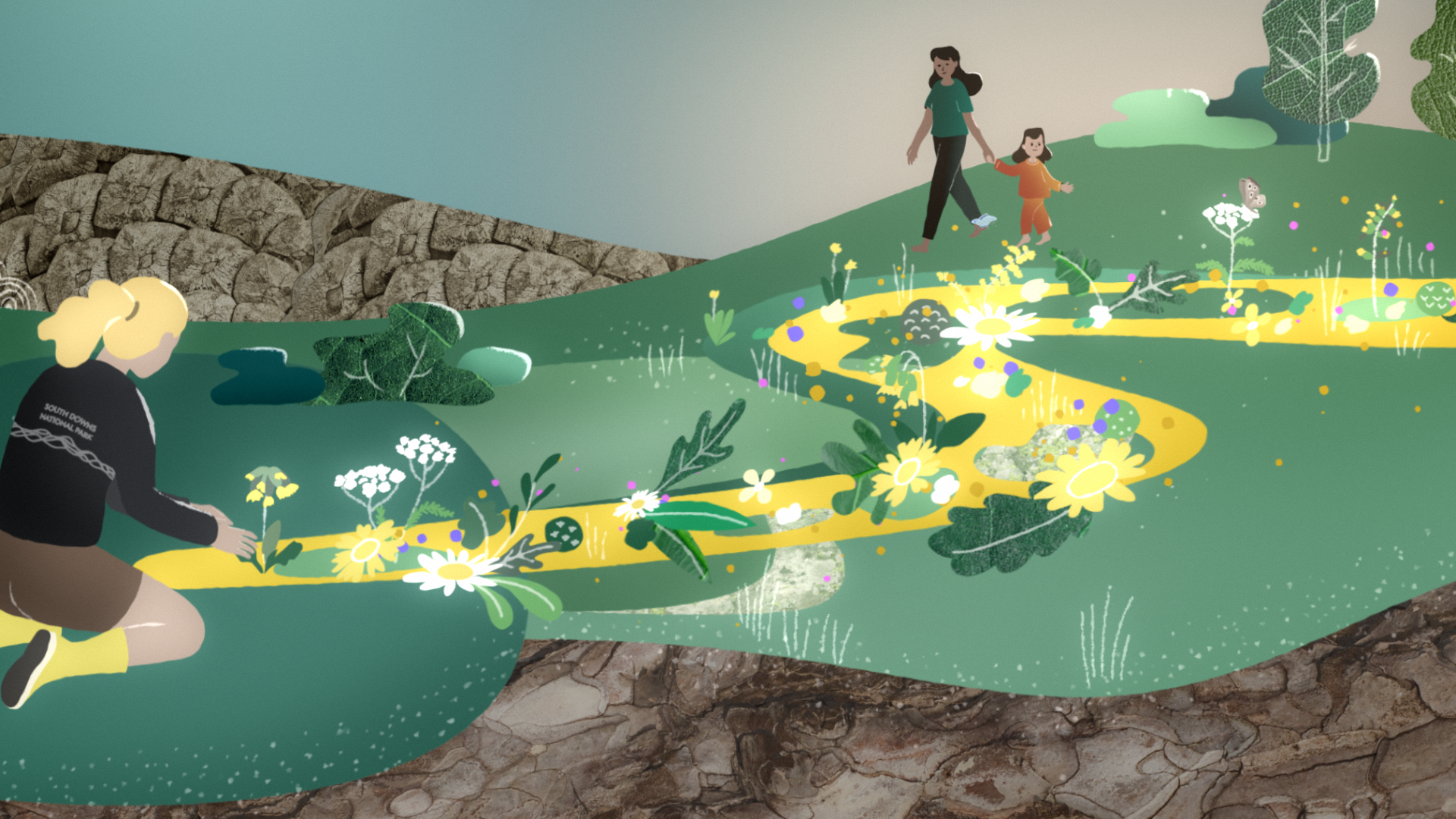 Nature recovery and tackling the biodiversity crisis sit at the heart of all National Parks’ important work.

As home to some of Britain’s rarest species and habitats, we have a crucial role in acting as “hubs” for the nation’s green recovery and a springboard for wider biodiversity bounceback.

And the public’s imagination has certainly been stirred.

The campaign has made national and international headlines and the star of the show – apart from the beautiful animals, of course – is a very heartwarming video.

The emotive film, “The Night We ReNatured”, tells the story of a young girl who dreams of nature rekindling in our countryside, villages, towns and cities as people work together to create a home for wildlife. The video had well over 30,000 views in its first week alone. It’s also set to be shown this summer on cinema screens across the South East region (you’ll be forgiven if you develop a lump in your throat – it’s that endearingly sweet!)

Beneath the amazing animation is a very sobering message. Biodiversity is declining across the world at an unprecedented rate (at least in human times). The latest national State of Nature report  showed that 41 per cent of UK species studied have declined, and some 133 species assessed have already been lost from British shores since 1500.  Around a quarter of the UK’s mammals could also be at risk of disappearing altogether. Climate change, pollution and habitat loss are, of course, among the causing factors.

Yet there’s also some great news – we can all play our part in reversing this ebb and help wildlife flourish once again.

It’s all about creating space for nature and that’s where #ReNature offers healing and hope.

So what’s it all about?

The campaign is looking to raise £100m over the next 10 years to create an extra 13,000 hectares – or around 21,000 football pitches (just imagine the size of that, for a second!) – of habitat where plants and animals can thrive.

To give you some context, it would mean an area over three times the size of Portsmouth (40km2) and almost double the size of Southampton (72.8km2) managed for nature.

The South Downs, Britain’s newest National Park and the third biggest in England, currently has 25 per cent of the land managed for nature, such as nature reserves, woods, heaths, ponds and flower-rich road verges.

But the South Downs National Park also wants to go one step further – ensuring that the remaining 67 per cent is nature-friendly by 2030.

Ecologist Andrew Lee, who heads Countryside Policy and Management for the National Park, explains: “Nature needs us now and we also need nature, perhaps now more than ever before in this post-pandemic world where green spaces have taken on a new level of importance.

“Apart from being incredibly beautiful and part of our shared appreciation for Planet Earth, nature gives us everything – whether it be clean water, fresh air or food to eat.

“We’re launching this campaign without a moment to lose because it’s time for all of us to help nature to renature.”

The South Downs already has some amazing biodiversity – including over 20 species of butterfly being found in just one square metre of chalk grassland and some heaths having all 12 native reptile and amphibian species. But, even here in the South Downs, nature is struggling and needs our help.

Andrew explains: “The crux of this initiative is that we want nature everywhere for everyone. Nature recovery in the South Downs National Park is not one big ‘rewilding’ project –  it will be achieved through lots of different projects, both large and small, that together will create nature recovery.

“Our goal will be achieved by working with our farmers, land managers, communities and local authorities, as well as other partners and environmental charities. It will include everything from hedgerow restoration, to planting thousands of trees, to the restoration of individual village ponds, to planting new wildflower corridors.”

Julie Fawcett, Chair of the South Downs National Park Trust, adds: “We know we’re aiming big with our fundraising target, but nature desperately needs our help. As a charity, we hope to raise the funds over the next decade in a variety of ways, including donations, grants, public funds and private finance.

“We really want this campaign to capture people’s imaginations about the beauty of nature and the important role we can all play in giving it a helping hand.”

So how can you help?

Also check out the National Park’s website, which is crammed with information about simple things you can do at home to help nature (how about a mini-pond in your garden?) and there’s also a #ReNature competition with some fabulous prizes.

So what are you waiting for? Join in the #ReNature push and let’s all help build a better future for both nature and people.