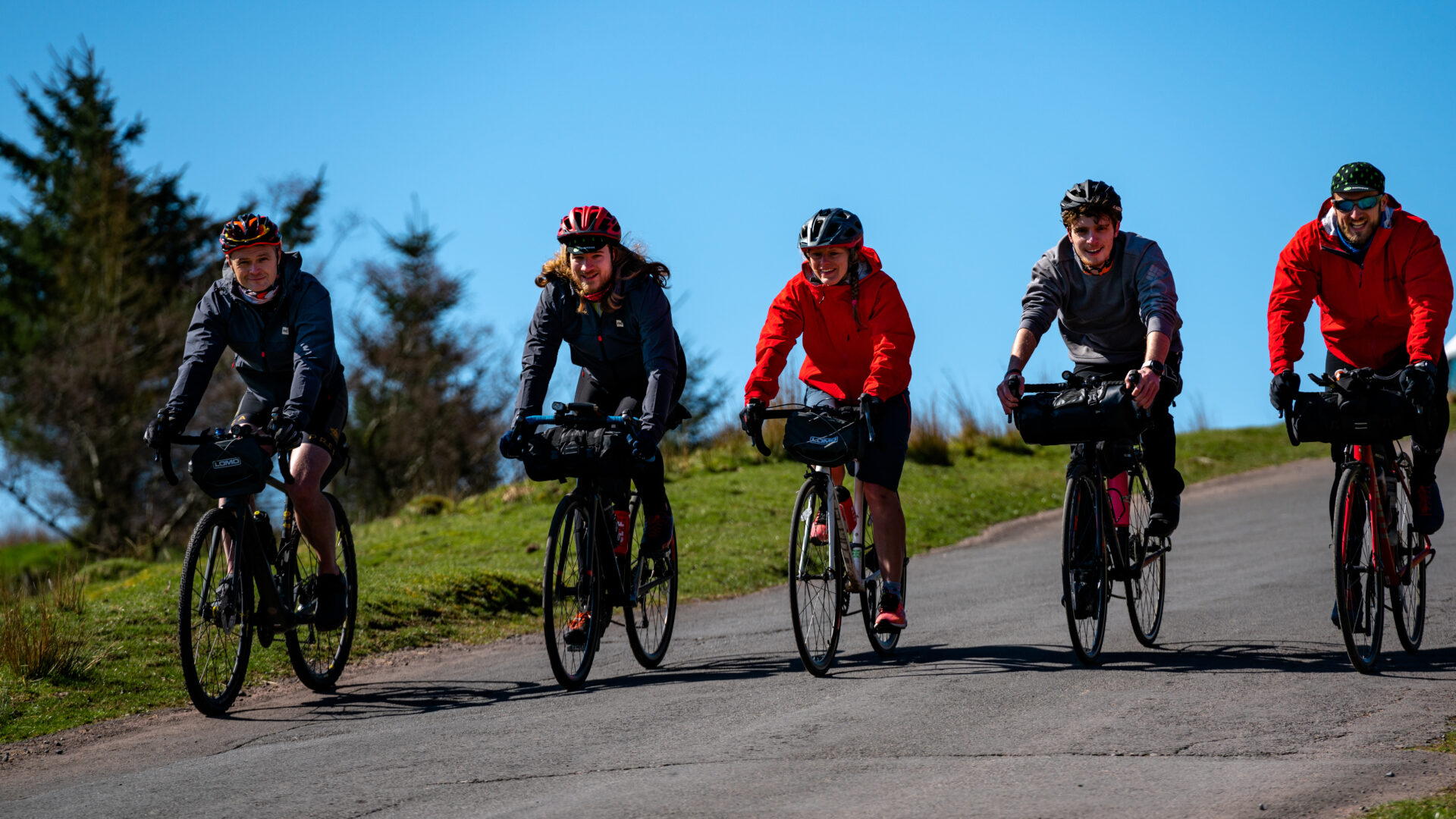 If the recent year has shown us anything, it is that we need our green spaces as a place to escape the fast-paced and unpredictable changes of the modern world. For many, 2020-21 has offered an unusual opportunity to explore the landscapes around us and engage with nature in new ways.

Pedal 4 Parks are on a mission to show the incredible importance of the UK’s green spaces for humans, wildlife and the future.

The team of five will set out on a two-week cycling journey using hand-built bamboo bikes and taking in six of the UK’s National Parks.  They’ll be fuelled by their passion for green space conservation and the desire to unearth what more we can do restore nature. Along the way the team will meet with experts and practitioners in environmental sustainability and record their journey and discoveries in a documentary film titled “14 Days South” that will share their message with the world.

This post is brought to you by Pedal 4 Parks media team members Emily and Natasha.

So… What are the team actually doing?

Setting off in June 2021 (COVID depending) our team will be attempting the famous JOGLE (John O’Groats in Northern Scotland to Lands End in Southern England) with a unique twist, making it a world’s first! The team’s journey will start at the northern tip of the Orkney Islands, cycling all the way to the Isles of Scilly, pedalling an impressive 1,200 miles. More still, they will not only be cycling across land, but also across 50 miles of water using specially made water bikes. The cyclists will be carrying the weight of their essentials on land and sea, including tents, sleeping bags, sleeping mats, cooking stoves, toiletries, clothing, water and food, which will weigh up to approximately 15kg, adding an extra hefty challenge to their expedition.

From North to South our team will be lucky enough to cycle through six of the UK’s 15 stunning National Parks: The Cairngorms, Loch Lomond and The Trossachs, the Lake District, the Brecon Beacons, Exmoor and Dartmoor. Given the time they will spend in these places, they are teaming up with National Parks UK to raise money for their foundation alongside their educational initiatives, which can be found at the Pedal 4 Parks Go Fund Me Page.

The idea for the expedition came to Isaac Kenyon, one of the cyclists, while on an unsupported row across the Atlantic Ocean in 2019. The beautiful sunsets and diverse wildlife he experienced were a stark reminder of life without human interference and made him think about the impact humans have had on the natural environment back in the UK. Over the years, National Parks and green spaces have changed dramatically, more than often for worse. Just 150 years ago, the UK was 80% forest, but today this has fallen dramatically to only 20%. Thinking about all we have taken from the planet, he wanted a way to give back. With this in mind Pedal 4 Parks was born, a campaign focused on highlighting the importance of regeneration and conservation in the UK’s National Parks, while still satisfying the adventurer within him!

As well as our environmental objectives, mental health is also at the heart of the project. The charity Mind has highlighted that during the pandemic alone, the number of people experiencing some form of depression has doubled to 19.2%, with 1 in 8 adults having developed moderate to severe depressive symptoms in the past year. These are worrying numbers, but through the expedition and documentary, they hope to show people the benefits of using outdoor spaces to relieve life’s pressures, especially those that have arisen during these unforgiving times.

First up, meet Isaac, the mastermind behind Pedal 4 Parks! Isaac has spent many years constantly coming up with new challenges and goals to complete to raise awareness towards new causes. One of his most recent challenges became the birthplace of Pedal 4 Parks. While rowing across the Atlantic Ocean, Isaac had nothing but time to think, and while surrounded by open water and sea creatures, he realised just how important protecting our planet is, especially during a pandemic. Having suffered with anxiety from always being a ‘yes man’ at university, consistently staring at laptop and mobile screens, the outdoors and adventure became his go-to when looking to ease his busy mind. As stated by Isaac, “Green spaces signify life, everything else is a static object. Being in nature feels real, like you are part of the world”. Thus, in an effort to save, protect, and help regenerate our National Parks, and to spread awareness of how vital nature is to our mental health and well-being, Pedal 4 Parks was born as one of his newest and biggest missions yet, and with covid creating an influx of stress among people, there is no better time than now for Pedal 4 Parks to really make a difference!

Alex decided to join Pedal 4 Parks after Isaac reached out to him offering an opportunity to join the team; as Alex became a keen cyclist throughout this pandemic, he very quickly said yes to the challenge! Having struggled with depression, Alex has seen just how crucial and valuable being outside is and can be in supporting your mental health. After completing the 100 miles across London and Surrey for RideLondon, raising money for charity, Alex continued cycling. Having seen that Pedal 4 Parks became so much more than just a sporting challenge, but instead a mission to make a difference and to support the regeneration of national green spaces and mental health, he was ready to take on the expedition! Alex believes there need to be big changes for the environment, and even bigger changes within businesses and workplaces to develop more eco-friendly, positive mindsets that put mental health first. By joining the Pedal 4 Parks team, he is able to expand his own knowledge and share it with others in powerful and exciting ways.

Although not his first sporting challenge, Lukas, at just 18 years old, became the youngest to solo-row across the Atlantic Ocean! (not everyone can say they are a Guinness World Record Holder, let alone for something as incredible as this!). However, when talking about sport, Lukas always recalls his first triumphant and somewhat spontaneous trek when on a visit to his father in Austria – from Saalfeden, through Italy and Slovenia, with an end in sight at Croatia, Lukas cycled a distance of 800 km over a period of 5 days, in aid of the Teenage Cancer Trust. Having met Pedal 4 Parks Founder, Isaac Kenyon, at the starting line of the Atlantic Row, Isaac knew Lukas enjoyed adventure, and asked if he would like to join the Pedal 4 Parks team in their world’s first land and sea JOGLE expedition. After struggling during his school years with dyslexia and never feeling quite good enough, the outdoors and sports became his tool for rebuilding self-esteem, confidence, and trust within himself, making green spaces an important and valuable part of Lukas’ own personal journey. Lukas hopes that through Pedal 4 Parks, the team can raise awareness of how vital green spaces are to both our mental and physical health, and to do so in such a way that inspires more than just one day’s worth of eco-motivation!

Sal has spent more of her life outdoors than in a building. Her love for the outdoors came from her younger years as a university student, having found a new interest in white water kayaking. Having continued her interest in kayaking during her time on a trip to Africa, she was eventually, and fortunately, asked to help out with a few small expeditions. Through training and with a lot of time, dedication and hard work, she landed a full-time job as a white-water kayaker with the chance to explore the world. Amidst the pandemic, training for new expeditions became difficult. With the creation of Pedal 4 Parks, Sal quickly climbed on board to support the challenge and train for a new expedition. Being able to raise awareness of the need to protect our green spaces and to share how the outdoors brings positivity, motivation and happiness has been a huge influence in Sal’s decision to join the Pedal 4 Parks team. She is looking forward to working towards promoting and saving our green spaces and National Parks.

Alex is the founder of Yellow Sub Geo, Yellow Sub Creative, and Nuable, certified B-Corps, values and purpose-based businesses all about sustainability and applied science, with the aim to make the world a slightly better place. Having previously worked for large companies where he felt constrained and suppressed by other people’s lack of imagination, and where profit was the driving force of the business, he knew he needed to create a change and make a difference, inspiring him to build his own business and to attract only the very best of people who share the same goal. Alex has had experience cycling before, being an outdoorsy man who enjoys green spaces and a good time surfing; he has previously raised money for a children’s charity cycling 1,500 km across France for 6 days with Club Peloton. When asked why he was keen to join Pedal 4 Parks, he answered, “Yes it’s a challenge and yes it’s an adventure, but above all, it’s value and purpose”. He believes it should be a “life-work balance, and never a work-life balance – prioritise your mental health and physical health, as it is the ultimate act of self-love”.